Prologue to Flyover Country - before I even set out on the journey...

Those of my readers that are familiar with my journey habits do probably know that something like having another ride on my Swiss-plated bike (currently a 2018 Tiger 1200) through Canada and the United States should not pose much of a logistical problem for me. Seasoned readers will also have noticed that I am not usually in the habit of starting a new blog for a journey before that journey actually starts. More commonly I am known to start my blog on or even one or several days after I have commenced the journey.
This journey is different, as you will see shortly, and certainly deserves a little prologue. So what has happened?
Well, I had the idea to do another trip through North America on my bike in the autumn (or "fall", as my North American readers call it) of 2018. Six month of preparation time in the past has proven ample to organise such a journey. Here in Switzerland everything was as usual; get my employer to approve another extended vacation (six weeks starting on the 18th of May 2019), getting a suitable provider for the airway bill and dangerous goods declaration ready, request an insurance policy for the bike in North America and pick a suitable airport for the departure and the return. Here is my 2007 airway bill, so that you know how these things look: 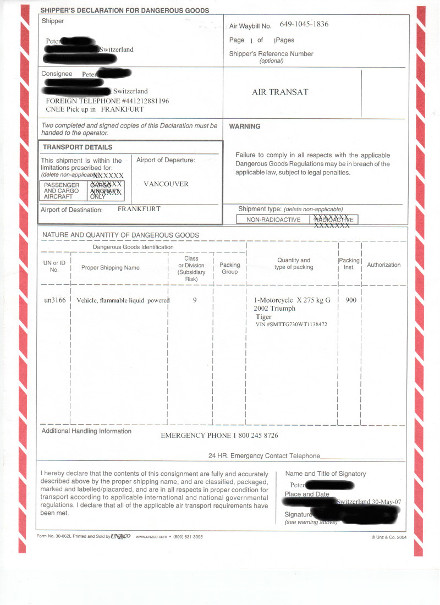 I asked Motorcycle Express to take care of my needs for shipping the bike to the U. S. (these guys do that since about the mid 1980's), but didn't receive a reply . I asked again a week later, and this time I got a reply and finally got the paperwork under way, though they told me that they were still waiting for the 2019 insurance rates. It took them two weeks to process my shipping application, which was no problem as there was still plenty of time. I was informed that they would receive the airway bill about 30 days prior to the the flight and would then mail that piece of paper plus all other required documents to me.
By the end of March I started to get itchy as Motorcycle Express hadn't said a word about insuring my bike. A motorbike shipped to Canada without an insurance is about as useful as a snooze button on a smoke alarm.
I was told that the insurance rates for Canada had not yet come through - the same excuse as they had been telling me two months ago.
On April 19 they shipped my documents from North Carolina. It took that envelope nine days to make it to Miami - that's an average of less than four miles per hour. If that envelope continued at that speed the documents would have arrived in September...
The documents finally arrived on May 2. In 2007 Motorcycle Express shipped them via UPS, which took less than 36 hours. This time they shipped them with USPS snail mail.
The instructions in the envelope read "two copies of the airway bill must be handed to the shipper". Of course the envelope contained only a single copy. We will see how that goes down with the shipper...
I think it is needless to mention that no insurance documents were in that envelope. Upon asking them I was told that the currently available affiliates of Motorcycle Express could only offer insurance within the U.S., but not in Canada. Given that they only have Canadian destination airports available in North America is somewhat of a show stopper. To put it bluntly; they are selling a product which is illegal to be used. Unless of course I push my Tiger those 67 kilometres from Montreal airport to the U.S. border as well as those 25 kilometres from the U.S. border in Washington state to the airport at Vancouver or find a haulier that does it for me.
On their website they have now added a page telling their customers that they are still working on that "insurance problem".
I had a look at the U. S. insurance Motorcycle Express offered me. For my Tiger 1200 that company demands 705 U.S. dollars for my six weeks trip. That is insane. Dear readers, you might find it interesting that my Honda Nighthawk I drove through the U.S. in 1995 did cost 56 dollars to insure for six months. You can read up on that journey here.
So my task is clear; find a sane North American insurer that will insure my Tiger for the U.S and Canada at an acceptable rate. The logical approach is to first find out why it is suddenly so difficult to get insurance cover in North America. My research soon uncovers that the cause is something so unlikely that I believe I am excused for not thinking of this myself; the European GDPR regulation. You can read up on it on the Wiki page, but basically this controversial data protection law came into force in May 2018 and all of those few U.S. insurers specialising in that limited market to insure non-U.S. vehicles in North America dropped EU residents immediately from their list of eligible customer as a result of it.
So a law that was designed to hit the internet giants like Alphabet and Facebook is about to sink my vacation and probably the vacation of a few others. The more I think about this nonsense from Brussels the more sympathetic I think about Brexit.
Never mind, these U.S. insurers obviously lost sight of a small but important fact; Switzerland is not a member state of the European Union. So with the help of this famous globetrotter website I got into contact with a U.S. insurance broker to whom I wrote that I live in a non-EU country. They kindly agreed to temporarily revive their foreign insurance scheme which they had discontinued in May 2018.
Last Thursday I received my insurance policy, 9 days before the beginning of the journey and for the princely sum of 103 dollars for the policy and 60 dollars brokerage fee. I have asked that insurance company if they are willing to insure EU residents as well, i. e. if I can publish their details here. I haven't yet received a reply, so if you arrived on my pages hunting for a North American insurance policy then you will have to wait until they allow me to publish their details.

Now that my bureaucratic problems have been sorted out, the next problem is appearing on the horizon; it looks as if during my three day window to get my Tiger (nicknamed the "Marsupilami" after an animal with a ridiculous long tail that does everything using that tail as a pun to all those computers in my bike without whom that bike is just a very heavy paperweight) to Nice, the departure airport, the weather will be absolutely horrible. Here is a precipitation forecast for next Monday:

The red dot in Switzerland is where I live, the red dot on the Mediterranean coast is Nice, and the blue stuff indicates the intensity of the downpour. That ride looks like an interesting challenge, especially with the Alps being located in between those two dots. I'll keep you posted.

Three days before I am supposed to leave for Nice my insurer has given me permission to publish their details, so here they are:

This insurance company may very well be willing to insure your Swiss motorbike in the U.S. and Canada in 2019 if you directly contact them, but they will most certainly refuse to work directly with Motorcycle Express due to previous different opinions regarding the handling of customers.
I have been told by Fernet that they would also be happy to insure motorbikes registered within the EU, so please go ahead and contact them - they are the most accommodating people you will find on the web.